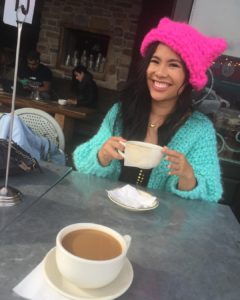 This is the fabulous Krista Suh, one of the co-founders of the fabulous Pussyhat Project https://www.pussyhatproject.com wearing one of her fabulous Pussyhats. If you haven’t heard of the Pussyhat Project by now you must be living under a rock so please climb out and click on the link and read about this incredible movement that has swept the wide world and caused every yarn shop in the U.S. to run out of pink yarn.

I met Krista in April of 2008 when we were living in Shanghai and she was there for a semester taking an intensive Mandarin language course at Jiao Tong University. Krista had taken a semester off from Barnard because, true to her form, she had taken so many classes and done so well she would have been able to graduate a semester early but she wanted to graduate with her friends and classmates so her mother suggested she go to Shanghai and stay with her aunt and perfect her Mandarin.

We had 8 sessions before Krista left Shanghai to go back to Barnard. She came to every class totally prepared. She read everything I assigned and wrote more than was required. She pushed me to the limit as a teacher. Our classes were supposed to be 2 hours but always went over because she was so engaged and engaging and she wanted to write so badly.

Krista is every teacher’s dream and like all great students she became the teacher. I bet I taught Krista everything I knew in the first ten minutes. Now she is teaching me. More than that we have become friends. I value her wisdom, insights, ability to listen, her creativity, her generosity of heart, and admire how she’s become a writer, how she’s living the creative life, and making things happen her way.

I will also never forget that she was one of my angels when I was staying in Los Angeles for 2 months while I was undergoing radiation therapy. The day after I got to LA she came to get me, arrived with a huge bouquet of beautiful roses that she had artfully put in a beautiful vase, and took me shopping. Every Friday she came and picked me up and took me to radiation and spent the day with me.

I’m amazed, but not surprised, at how the Pussyhat Project has taken off and I’m so proud of Krista (and her co-founder, Jayna Zweiman, who I do not know) for what they have created. I will be back in Sweden on January 21st but Libby and I plan to watch the Women’s March on Washington on CNN. We will have our Pussyhats on and we can not wait to see that sea of pink pop out of our TV screen. My heart swells every time someone mentions Pussyhats especially when they don’t know I know Krista and tell me about it so I can be in the know.

Usually I’m the one who wears people down, not the one who gets worn down. There was something special in Krista that allowed her to wear me down and get me to agree to work with her. Maybe it was ming yun 命运 the concept of fate and destiny meeting with free will and circumstance. Whatever it was I’m glad and grateful I’ve gotten into Krista’s orbit. Her heart and her smarts are going to take her far and make the world a better place. They already have.