One Hell Of A Woman 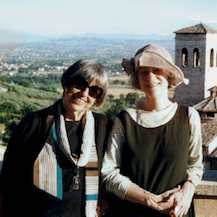 Bea Kreloff, one hell of an incredible, formidable, indomitable, optimistic, wonder-filled woman died on August 17th. She would have been 91 on September 11th. I remember Bea telling me how she and her partner, Edith, sat in their apartment at the Westbeth Artists Community in the West Village in NYC and watched the second plane fly into the Twin Towers. “It was a hell of a birthday,” she said.

That’s Bea on the left and Edith on the right in the above picture I took of them in Assisi, Italy, in 1999 when I took a writing workshop with Dorothy Allison and Frank McCourt at Art Workshop International. Bea and Edith started Art Workshop International in 1980, two painters who wanted to spend the summers in Italy in a cultural, artistic environment with like-minded people. For over 30 years they taught painting classes and convinced famous writers and painters (nobody could say no to Bea!) to come to Assisi and teach two week workshops to people like me who were committed to their craft but needed a push to get to the next level. That workshop in 1999 changed my life.

I stayed in touch with Bea and Edith over the years, would see them sometimes when I went to NYC, and would call them when Libby and I started moving around the world. In 2007, when we were living in Shanghai, I went back to Assisi again and this time took a workshop with Maxine Hong Kingston, another life changing event. The environment Bea and Edith created in Assisi–the mix of people teaching, people attending, all types of artists, dinner discussions–was one of the most affirming experiences of my life and of many of the people I met there. Time and time again I heard people say that being part of Art Workshop gave them permission to take their craft seriously, gave them permission to truly call themselves a writer or a painter.

Bea was the front woman who always held court during cocktail hour and dinner time. She’d have her martini and receive everyone. Edith held one-on-one conversations and held up things behind the scenes. Bea and Edith were the yin and yang that kept Art Workshop alive. I remember them telling me about the time they met. They’d both been married to men and met at a lesbian dance in the Village in the 70’s, I think. They fell in love on the first dance and never let go.  Bea was the savory to Edith’s sweet.

In 2008, Bea and Edith, along with Bea’s son Charles and Edith’s niece Sharon, came to visit us in Shanghai. They had started the trip with the usual six weeks in Assisi, then onto the Venice Biennale, St. Petersburg to see the Hermitage, Mongolia where Edith had a show of her paintings, then Beijing and Shanghai. I’ll never forget the time with them in Shanghai and how then 83 year old Bea was thrilled that she could see the Hermitage and see China. She kept saying, “I never thought I’d see this,” and was filled with curious wonder the whole time.

In 2013, when Libby and I were finally able to legally marry, Bea was determined to get to our wedding in NYC. Two days after she got out of rehab, recuperating from an illness, I’ll never forget her coming in a wheelchair to our wedding with her son Elliot. It meant so much to me and to us and remains one of my favorite memories from that incredible night.

I believe the highest compliment you can give someone is to say that they really lived their life and, believe me, Bea really lived her life. She dedicated herself to lesbian and feminist causes her whole life in addition to dedicating herself to Edith and to her beloved sons, Charles and Elliot. She created Art Workshop International out of nothing and kept it going and growing for 36 years. She followed her passions and didn’t suffer fools gladly. She was an inspiration to everyone who came in contact with her.

Bea was a force of nature. Her son, Charles, wrote me and said, “It’s hard to imagine a world without my mother in it.” I know exactly what he means. In my wishful, childish way I really did think she would live forever, that her boundless determination, energy, optimism and resourcefulness would keep her alive forever. If only.