When You Don’t Really Need Words 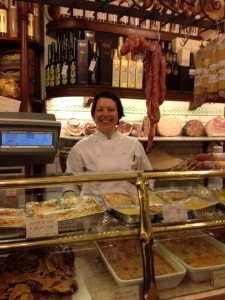 This is Daria, the kindest person in Modena, Italy. She works at the most incredible salumeria (deli) I’ve ever been to, Hosteria Giusti, http://www.hosteriagiusti.it. Behind the deli is a small six table restaurant you have to walk through the kitchen to get to. They only serve lunch and unless you make a reservation way in advance you’ll never get in. I’ve been lucky enough to eat there once and it’s one of the five best meals I’ve had in my entire life. If you ever find yourself in Italy, make a trip to Modena and to Hosteria Giusti. If you know in advance you are coming, do yourself a favor and make a reservation for lunch.

When I first started shopping at Giusti soon after arriving in Modena, I was raw and extremely uncomfortable. I’d spent the previous seven years in China–five in Shanghai and two in Hong Kong–and Italy felt so alienating to me. Nobody was screaming around in Mandarin, I couldn’t scream around in Mandarin, I looked like everybody else, and there were no jiaozi (dumplings) or xiaolongbao (soup dumplings) to be found anywhere. Every time I opened my mouth when someone spoke to me in Italian, Mandarin wanted to come out because it was the only other language I knew. I felt like a freak.

I was introduced to Giusti by Paola Poluzzi, a lovely Modenese woman who helped expats for Libby’s company acclimate to Modena and who took me there the first time. It was so easy going into Giusti with Paola, telling her in English what i wanted and having her deal with the woman behind the counter who I later found out is the owner.

Going in the second time by myself was a whole other story. I wished, as soon as I walked in, that I hadn’t come because I had no idea how to pronounce anything, but I had no food at home and was starving. The place was packed, as it always is, so while I was waiting I looked around and saw some taleggio cheese. That, I could order. It is my favorite cheese of all time. I started to settle down. In addition, I knew how to say pasta.

There are no numbers to pull in Giusti because the people behind the counter know who comes in, and in what order. When Daria looked at me and said, “Signora, what would you like?” I was ready to order. “Questo taleggio,” I told her and pointed to the taleggio. “Ok,” she said but then went on to give what felt like a long soliloquy on another cheese right next to the taleggio. “Ok,” I told her, then showed her with my hands how much I wanted. I don’t remember what else I ordered but I do remember feeling so grateful to Daria because she was so kind and so patient with my pointing and indecision even though there was a gaggle of people behind me.

It turns out the taleggio was Taleggio di Pecora, sheep’s milk taleggio and it is the most divine cheese I’ve ever had in my life. From that point on, whatever Daria pointed to, I bought. We soon learned our pas de deux, me pointing, Daria giving her approval or telling me what was better. I spent a lot of time accessing Google Translate on my mobile phone.

Daria speaks no English, I only speak a few words and phrases of Italiano, much to the chagrin of my long suffering Italian teacher, Elena Panini. “Nancy,” Elena has said to me on more than one occasion, “why are you not learning Italian? I’ve watched you laughing and joking with the Chinese students in the class in Mandarin. If you can tell jokes in another language then you have a command of that language. And, if you can speak Chinese you should easily be able to learn Italian.” Daria and I mostly communicate with gestures, pointing, smiling, and a heart-to-heart connection with a Google Translate assist.

As I was going through chemo therapy, I thought about dying everyday and I thought about the regrets I would have if I died. I’ve tried to live my life so that at the end of the road I’d have no regrets, but coming so close to losing my life this past year made me think about what regrets I’d have if I didn’t wake up tomorrow and there were only two. The first was, I would regret not getting my novel published, but I knew if I died, I would die trying, so I’d have no regrets about my effort.

The second and last regret was that I never said goodbye to Daria when I left Modena last February. The time spent last January and February trying to get diagnosed in Modena was so fraught that when I left to go to LA, I was in a panic. Over this last year, I often thought about Daria and Hosteria Giusti.

Even though I don’t speak Italian and Daria doesn’t speak English, it’s surprising how much I know about her. I know that she grew up in Modena, that she’s been friends with Cecilia, the daughter of the owner of Hosteria Giusti, since she was young, and that’s how she ended up working at Hosteria Giusti. I know that Matteo, Cecilia’s brother took them on a trip two summers ago to France to taste the food and wine. I know that Daria has a daughter who is fourteen and a son who is nine, and I know that she wants her children to learn English and go to college and get good jobs. I know which kind of Franciacorta she thinks is the best, which kind of tagliatelle she likes and which kind of pesto from Liguria she recommends.

When I got cleared by my doctors to come back to Modena for a month, I sent an email to Daria through Libby telling Daria that I was sorry I never got a chance to say goodbye to her last February and telling her why. Libby had her secretary translate it and a week before I got came back to Modena, Libby took the letter to Daria.

Last Saturday when I walked in to Hosteria Giusti, I could hardly contain myself. The salamis and proscuitto were hanging from the ceiling. I could smell the rosetti, the polpette, and the cheeses. But mostly, I saw Cecilia and Daria behind the counter. Daria was with a customer when I walked in but lit up when she saw me and called out, “Ciao, Nancy, ciao!” Cecilia came from behind the counter and kissed me on both cheeks. As soon as Daria was finished with her customer, she came out and hugged me hard and kissed me on both cheeks also. She thanked me for my letter, then Cecilia produced a letter for me. Daria had written it and left it there for me in case I came in and she wasn’t there.

But I know you’re a strong woman, full of zest for life and positivity, and these features will surely have helped you to address this difficult period.

Surely many relatives and friends will be close by because I think it easy to love you. I really hope to see you soon.

I’m really glad that you’re okay now and do not forget that in this small salumeria in Modena there is always someone waiting for you with open arms!

I haven’t spent much time here in Modena, maybe a year and a half, and I haven’t learned much Italian, but I’ve learned that there are times when you don’t really need words to communicate and make a connection with someone. I will remember Giusti and the meraviglioso food I bought there, but even more I will remember Daria until the day I die, whenever that may be. I will remember our connection even though we don’t speak the same language. And I will remember her kindness and her beautiful smile.

Thanks for reading, and remember do NOT trust those mammograms!