They Blinded Me with Science, and Heart 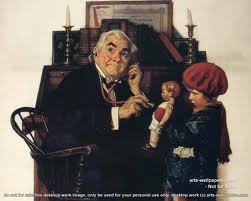 I never understood why anyone was interested in becoming a doctor, dealing with other people’s bodily functions all day, poking and prodding their patients privates day in and day out. When I was much younger, I just assumed that the only reason anyone would be a doctor was because of money, because they’d get stinking rich. Even though I wanted to have financial security, something I never had growing up, it didn’t occur to me to go to medical school, but  I’m grateful it occurred to other people. My whole view of doctors has changed since I’ve been dealing with this whole cancer mess.

When I was getting nowhere  in Italy,  having seen eight doctors in seven weeks, none of whom could give me a definitive diagnosis, I was frantic. I came home from yet another fruitless appointment and called my friend, Lisa, who’s retired from Cedars-Sinai in Los Angeles. I had no shame and begged for her help.  Please, please, I cried to her, can you help me find a doctor at Cedars who can help me? Within two hours she got back to me and I had two appointments for two weeks later with top notch docs. When I was describing how little progress was made in the past seven weeks just trying to diagnose me, let alone treat me, Lisa told me that when you’re dealing with something life threatening, you want to go to a hospital where it’s almost a factory, where the doctors have seen everything and done everything and have perfected procedures through their vast experience.  She told me not to take it personally if the docs didn’t have the best bedside manner, because they had the best minds and experience, and they would be committed to diagnosing and treating me as quickly and correctly as possible.

My body was in a massive fail and all the things that are important to me–compassion, understanding, relationships–fell away because I just needed to know what was wrong and how to fix it. When I was whining to my friend Emily that all my lady parts were failing me, Emily said, “Hey, all the over-achievers want to work at Cedars so that’s where you want your lady parts to be!” So I went to Cedars prepared to be put on the assembly line, to be moved along the conveyer belt, robotically taken apart and, hopefully, put back together properly by the best over-achievers in the business.

What I got instead at Cedars are doctors who not only are at the top of their game, and who run the best factories, but have been compassionate, understanding, who’ve formed relationships with me, who’ve spent inordinate amounts of time with me, who’ve answered Libby and my questions patiently, thoroughly, and clearly so our laywomen’s minds understand completely. I have been moved by their compassion and humanity and grateful beyond belief for their incredible minds and open hearts.

My doctors have made a horrible situation a bearable process, so much so that  I’m now hoping some of my  brightest students go into medicine.

As always, thanks for reading.