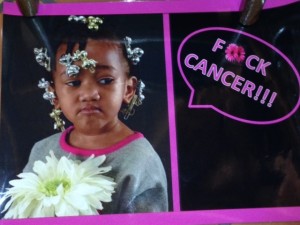 When I started this blog at the beginning of the year, I thought my next post after Connection and Kindness would be about the differences between being an expat and an immigrant, about expat privilege and the people I’ve observed who don’t acknowledge their expat privilege. I have a long list of topics I’ve been keeping notes on and writing about  and I had a pretty good plan, I thought, for how I wanted this blog to unfold. Then, over the past two months, my whole world has blown up.

Everything in my life during the past 10 years has been defined by B.C. and A.D.–not Before Christ and After Death, but Before China and After Departure. Now the meaning of B.C. and A.D. has changed to Before Cancer and After Diagnosis because last week I definitively found out I have breast cancer. It still shocks the hell out of me to write those words. I have breast cancer.  And, the kicker is that I have a 6cm banana shaped tumor in my right breast that never, EVER, showed up on any mammogram or ultrasound.  My wonderful oncologist, Dr. Scott Karlan at Cedars-Sinai in LA, told me I’ve probably had breast cancer for seven to nine  years and it’s a good thing we caught it now.  Seven to nine years with no symptoms and no sight of the tumor. Unbelievable. In the past two months no less than seven doctors have given me a breast exam and not one of them ever felt that tumor. I’ve had three different mammograms and two ultrasounds.  Nothing.

The only reason I know I have breast cancer is because my beloved Libby made us get super duper physicals to start the year off on a healthy note in early January. She was adamant, forceful and insanely possessed about us doing CT body scans, which were an optional add on. Lighten up, Libby, I told her because I thought she was being more than a bit extreme, completely over the top, and I even tried to talk her into putting the physicals off until this summer but she wouldn’t let me sway her.  Bless her for holding fast.  Over the last 25+ years Libby has figuratively saved my life more than once–this time she’s literally saved my life. If we hadn’t done those scans, I would have waltzed away from that physical thinking the only thing I needed to do was lose some weight.  I just barely, by like three seconds, made it into the good category on the stress test.  My cholesterol was good, blood sugar was good, my mammogram was totally clean, everything was good.  As the doctor where we did the physicals said, “For someone your age and your weight, you did great!”  I am overcome and filled up with tears and love and gratitude when I think about how many more years I’m going to enjoy with Libby because she made us do those CT scans.

What the scans showed were five enlarged lymph nodes in my right armpit–one 3.2cm and the other four about 1.5cm. The doctor who reviewed our physicals with us said she wasn’t too worried since nothing showed up in my blood work and  my mammogram was completely clean.  She asked me if I had cats. Cats?  Yes, cats, because apparently there’s some disease people can get from their cats. No, no cats I told her, and this just gives me another reason to not care for cats.  Then she asked if I’d recently been sick because maybe the lymph nodes were fighting off some infection.  Nope, haven’t been sick. She told me, just to be safe, I should get the largest lymph node biopsied.  Since Libby and I were hopping on a plane the next morning to go back to Modena, where we live in Italy, we decided to deal with this when we got back there.

I’m not going to bore you with all the details of the last two months, nor draw you in to the anxiety, panic, fear, rage and utter helplessness I’ve felt in these last two months.  I just can’t go there right now.  But I do want to say if you are a woman, love a woman, or know a woman, please tell them this:  just because your mammograms are crystal clean and the radiologist tells you “everything looks great,” don’t believe it, especially if you have dense breasts.  If I can save one person’s life by exposing myself like this, it will all be worth it.

Because of Libby’s insistence, and because of those CT scans, I will be ok.  It’s going to be a long haul, though, with surgeries, chemo, radiation, and estrogen blocking pills, but it will be nothing compared to what might have been if I’d trusted those mammograms.

Thanks so much for reading.